My journey into understanding the power of perspectives and learning how two people could look at the same situation and see two different truths started at a very young age. My older brother Andy and I are only two years apart and were inseparable growing up together. See how adorable we were? 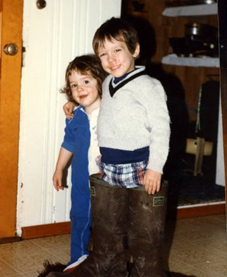 Our closeness, along with growing up before technology, also meant we had a lot of adventures (and misadventures) that would make my mom nervous if she knew the full extent. To understand our relationship, frequently Andy and I would convince people we were Siamese twins who were connected by our pinkies and then confidently showed our subtle scars that healed remarkably well (there were no scars and we probably weren’t as convincing as we felt).

We were also very resourceful young-in’s who didn’t let barriers keep us from having fun, like finding toys in the trash to play with. Side note – my mom is probably horrified that I’m publicly sharing we played with things in the trash. To clarify, she didn’t know and certainly did not encourage such behavior. Love you Mom!

Which brings me back to perspectives. One fine summer day, we will say in the early ’90s, the Great Bluedini Kool-aid was flowing, the hyper-color shirts were hyping, and we discovered treasure in our neighbor’s trash… lawn darts. For those of you who aren’t familiar with or need to be reminded, this is what they looked like: 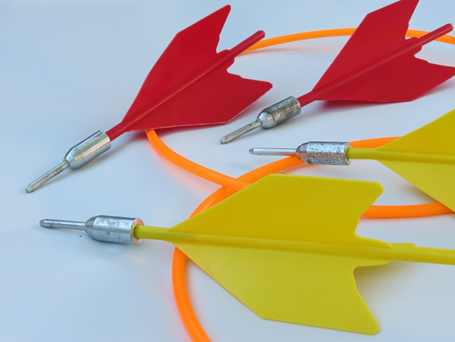 Yes, they were illegal back then, and still are. Although a quick search revealed a company is still selling these as they have been able to jump around a legal loop hole. In my opinion, this is a terrible, terrible idea!

Once we got our tiny, mulberry stained hands on these, it was game on. The game you might ask? Let’s see who can throw their lawn dart up the highest and get it to stick in the ground. As you can imagine, this game that was seemingly so innocent, was a bad idea…in fact it was a TERRIBLE IDEA. I blame the sugar and copious amounts of blue #2 food dye we ingested that summer for our poor life choices.

After a few rounds of playing, something went awry.  My grandpa Noll always said, “It’s always fun until someone starts crying.” On my brother’s next toss the dart did not hit the ground. Instead I became its target, or more specifically, my head. To be clear, my brother did not intend for this to happen (it took a few years for me to accept this).  As I was bending down to pick up my perfectly stuck dart, I heard and felt a *THUMP* at the top of my head. I won’t elaborate on the details, but I will calmly remind you that head injuries bleed quickly and fiercely. Imagine my mom’s shock and horror to come out and see me covered in something other than mulberry stains and Great bluedini Kool-Aid.

Whether it is lawn darts, a conversation, a decision etc., each one of us holds onto a point of view that shapes how we see, feel, and experience that event. To accept your perspective as truth can not only be dangerous but can limit you from seeing other possibilities that might better serve you, the situation, or your relationship.

Next time you find yourself holding onto a grudge or replaying an angry conversation over and over again, think about the other party’s perspective. Did they throw the lawn dart at your head, or might you have walked into their area? Maybe it’s a combination of both. Coming to an understanding about varying perspectives can deter you from more than a few headaches…and maybe a few lawn dart induced stitches!